As passive UHF band RFID systems are widely adopted in logistics supply chain, warehousing and retail storage management, the research and design of handheld RFID reader units have become increasingly important. The main requirements for handheld reader units are small size, light weight, long battery life, and a suitable reading range for specific applications. In addition, consideration should also be given to the directionality of the reader unit in reading the tags.
Passive UHF band RFID systems use electromagnetic waves to communicate through the coupling between readers and tags. Figure 1 shows a passive UHF band RFID system. The reader transmits a continuous wave (ConTInuous Wave, CW) signal to the tag to activate the chip of the tag, and then transmits a command signal to the tag, and the tag communicates by reflecting its corresponding identification code back. The tag chip has no internal power supply, so all the energy it needs comes from the electromagnetic waves emitted by the reader through the antenna. 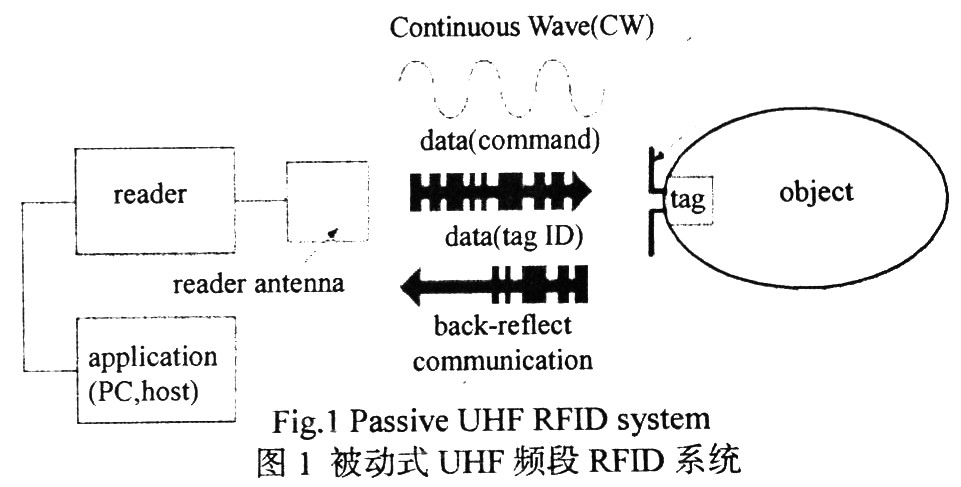 The development of RFID readers is more and more inclined to miniaturization and portability. The operating frequency of the RFID system in the UHF band is around 900 MHz. Traditional antennas are too large for handheld RFID systems, and reader antennas account for an increasing proportion of reader sizes. On the premise of maintaining the performance of the antenna, it is much more difficult to reduce the size of the reader antenna than the reader circuit. Therefore, the miniaturization of the antenna size has become the current research trend of RFID reader antennas.
The main requirements for the antenna in the UHF band RFID system are as follows: when VSWR <2, the impedance bandwidth ranges from 902 MHz to 928 MHz, with a certain gain, low cost, low profile, and unidirectional radiation.
Because the microstrip antenna has the advantages of simple structure, easy manufacturing, and low cost, the antenna of the UHF band RFID reader generally uses the microstrip antenna type. Therefore, this article mainly studies the miniaturization of the antenna of the UHF band RFID reader based on the microstrip antenna.

1 RFID reader antenna miniaturization design
1.1 Microstrip patch antenna The following is a simple analysis of the working principle of a rectangular microstrip antenna through the classic microstrip antenna design theory. The microstrip patch antenna is composed of one or more dielectric layers with a thickness much smaller than the wavelength (approximately a tenth of a wavelength), metal ground plates covering the upper and lower sides, and radiating elements (the size can be compared with the wavelength). Radiant elements have various shapes, such as square, rectangle, and circle. The shape of the rectangular microstrip antenna is shown in Figure 2 (a). Assuming that the electric field does not change along the patch width and the thickness of the dielectric plate, but only changes along the patch length (about one-half wavelength), the radiation is basically It is caused by the gap between the two open ends of the patch. At this time, the rectangular microstrip antenna can be regarded as a binary slot array that is excited by half the wavelength in phase and radiates to the half space above the floor. For a radiator with higher efficiency, When the thickness of the dielectric substrate is h, the operating frequency of the antenna is fr, and the relative dielectric constant is Îµr, the practical width and the length of the resonance unit can be obtained according to the formula in [5]. Assuming that the dielectric constant Îµr is 2.5 and the thickness h = 5 mm, it can be obtained that the size of the microstrip antenna is at least about 101 mm in width W and about 124 mm in length L, plus the edge elongation of the substrate, about Increased by 20%, so the resulting size is about 120 mm Ã— 150 mm, which occupies a larger area, which is not conducive to the integration of reader antennas. Patch antennas with high dielectric constant materials may be the most obvious way to reduce the size of patch conductors. The main constraint is to reduce bandwidth and efficiency. The cost of using high dielectric constant materials is also a limiting factor, although recently there have been some low-cost high dielectric constant ceramic materials that can keep costs within a certain range. However, the high loss factor of using these materials will significantly reduce the radiation performance of the printed antenna. The following gives a method to effectively reduce the size of the microstrip patch antenna, design and give the experimental results.

1.2 Based on the above analysis of the principle of the microstrip antenna, the inner field of the rectangular microstrip antenna working in the main mode is distributed at L / 2, which is the zero point of the electric field. Conducting the connection between the upper patch and the ground does not affect the internal field distribution, and then half of them are discarded to form a 1/4 wavelength patch antenna, a technique for reducing the size of the patch antenna. One of its radiating edges was interrupted on the short-circuit plane of a patch antenna and the ground plane. Similar to the relationship between dipole antennas and monopole antennas, the short-circuit plane acts as a mirror image, effectively reducing the size of the patch conductor by half.

Compromise the size of the patch and the required bandwidth, radiation efficiency and other factors, choose the appropriate plate, appropriately increase the dielectric constant of the medium to reduce the size of the patch conductor, use FR4 substrate, relative dielectric constant 4.5, loss angle The tangent value is 0.002 6, the plate thickness is 5 mm, and the copper film thickness is 0.05 mm. The antenna structure is shown in Figure 3. The length L of the radiation patch is about 1/4 of the medium wavelength, that is, Lâ‰ˆÎ» / 4, Î» is the medium wavelength. After the HFSS (High Frequencv Structure simulator) simulation analysis, the resonance point is reached At 915 MHz, choose the patch length L = 46.1 mm and the radiation patch width W = 36.6 mm. The size of the substrate is shown in Figure 3. It can be seen that a metal wall is provided above the patch antenna, and a radiating edge is interrupted on the short-circuit plane of the patch antenna and the ground plane, which reduces the size of the metal patch. Coaxial feed is used. The feed point of the coaxial feed is located on the side of the antenna near the metal wall. The position of the feed point is appropriately selected. The size of the feed point is shown in Figure 3. The input impedance of the antenna reaches 50 Î© . 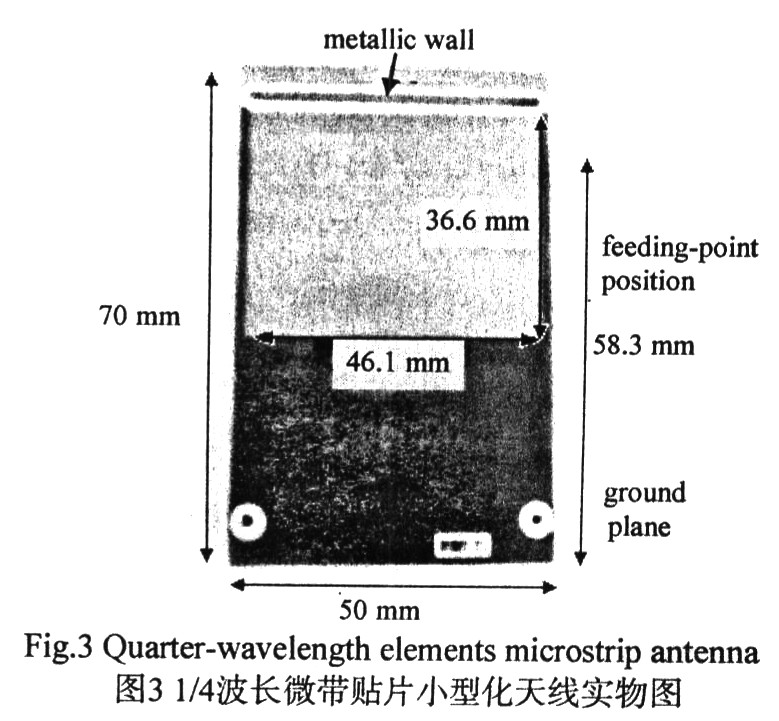 2 Antenna test and result analysis The antenna is simulated and optimized in the software HFSS, and the radiation pattern, Smith impedance circular diagram and return loss shown in Fig. 4 to Fig. 6 are obtained. 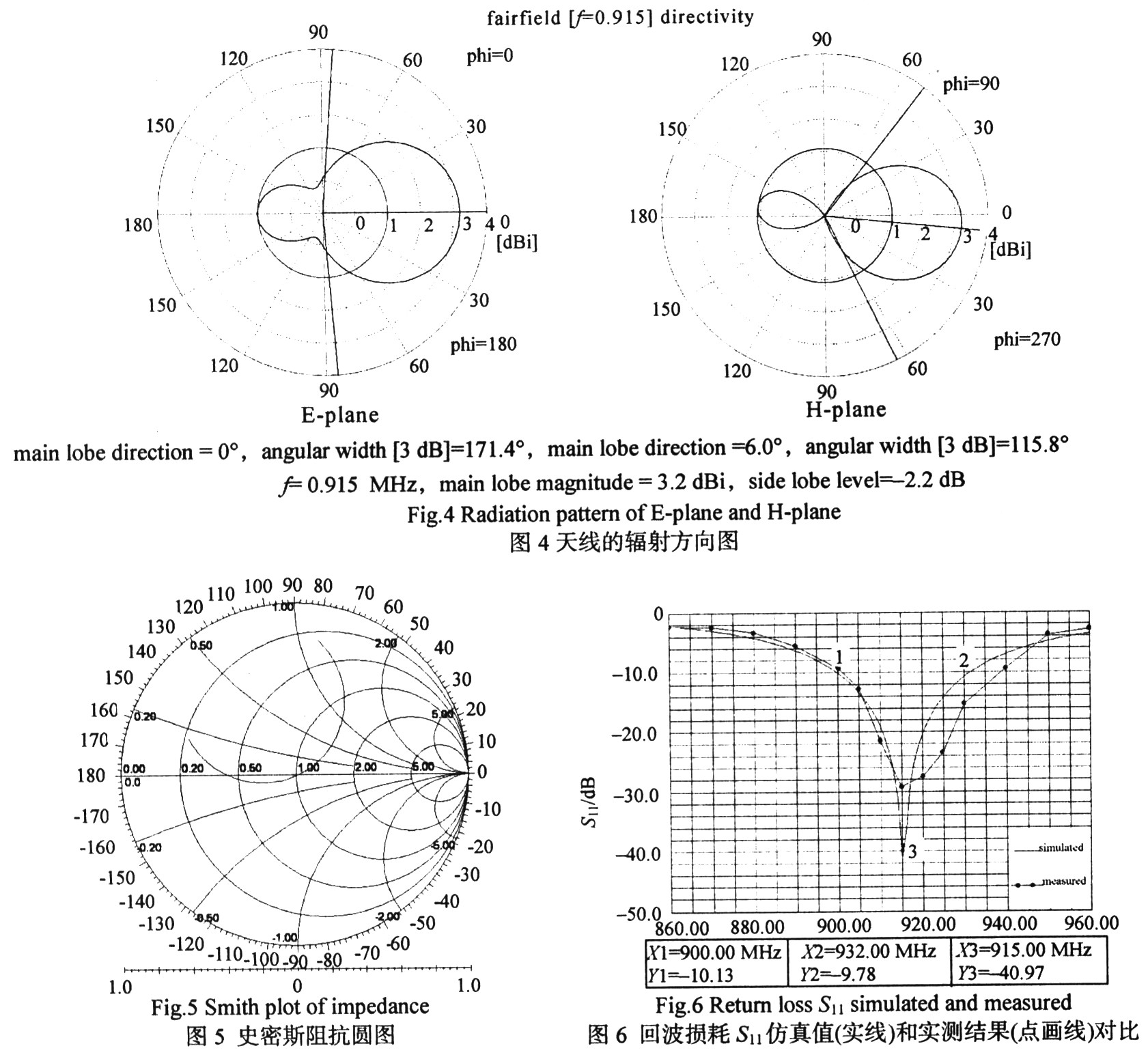 3 Conclusion In the end, a miniaturized microstrip patch antenna with excellent performance was developed. The experimental results show that the use of 1/4 wavelength microstrip patch significantly reduces the antenna area, the area is reduced from 150 mm Ã— 120 mm to 75 mm Ã— 50 mm; through careful design and optimization, the forward radiation is achieved; the antenna The impedance bandwidth includes the RFID worker frequency band (902 MHz ~ 928 MHz), the actual test results are basically consistent with the design results, in line with the actual RFID reader antenna requirements. The antenna has small size, simple structure and good performance, and can be widely used in the development of handheld UHF RFID readers.