Due to the special role of ATM (AutomaTIc Teller Machine, hereinafter referred to as ATM) in the banking business, by the end of 2007, the number of ATMs in China had risen rapidly to about 138,000 units, including about 123,000 ATMs in UnionPay. In the ATM sales market in China, the ATM market shares of six major banks, such as Industrial and Commercial Bank of China, Agricultural Bank of China, Bank of China, China Construction Bank, Bank of Communications, and China Postal Savings Bank, account for about 85% of the total Chinese ATM market. However, from the perspective of the number of ATMs per million population, China's ATM demand gap is still large. In 2006, China had only 73 ATMs per million population, and the city had 273 ATMs per million population, far below the average of 1,150 in the world's top 20 countries. As of 2009, the number of ATMs in China has reached 184,000, with an average annual growth rate of more than 20%, second only to the United States, Japan, and Brazil, ranking fourth in the world. According to the current growth rate, some experts predict that In 2011, the number of ATMs in China will exceed that of Brazil, ranking third in the world.

This type of method is mainly used for in-line ATM monitoring. The installation methods of the line-type ATM machine are wall-mounted and lobby-type installation. Through-wall ATMs have separate and high-value cash-adding rooms, so this type of ATM machine installation method has a flexible way in camera wiring. These ATM machines are usually installed in a unified room with a customer area and cash-adding Area. In addition to installing cameras for basic monitoring requirements, each camera also needs to be installed with 1-2 panoramic cameras in the ATM customer hall to monitor the hall in the way of shooting through, as shown in Figure 1. 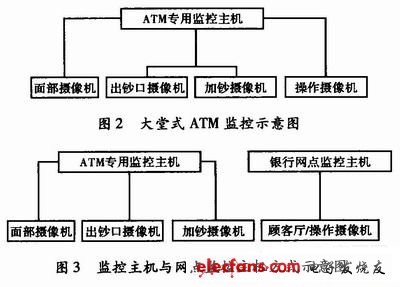 With the development of product technology, the network functions and video compression technology of monitoring equipment are constantly maturing and improving, especially based on the application of MPEG4 and H.264 compression technology. The network bandwidth of CIF (352 & TImes; 288) picture quality is not guaranteed Under the premise of change, each code stream can be as low as 384 kbit Â· s-1 or even lower, so that remote video surveillance networking based on the low-bandwidth bank private network or VPDN network is also in major banks and commercial banks across the country. Large-scale construction and put into use, these monitoring centers have changed the bank â€™s approach to ATM prevention, from the original passive to semi-active mode, turning the original after-event response into an in-event and after-event response at the same time. Remote real-time monitoring, the central duty officer monitors the ATM on-site environment to realize manual and early warning.

First, background modeling and foreground extraction. Use the mathematical statistical model to save the statistical information of many pictures in the model, and then compare the current picture with the model to extract the places where foreign objects may exist. The background of the method can reach the statistical value of pictures for several hours or even a day, which enhances the adaptability of the detection function to various environments, greatly reduces false alarms, and reduces the influence of light. At the same time, the background modeling and foreground On the basis of the extraction method, some object feature judgments are added to reduce false positives and improve the accuracy of detection. The detection process is shown in Figure 4. 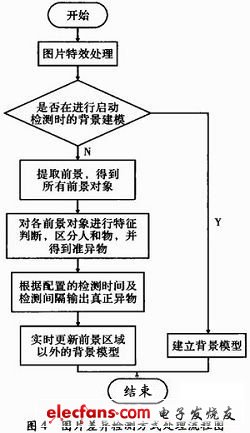