In Copenhagen, Denmark, held on December 7-18, 2009 in Copenhagen, Denmark, which was hailed as the "last chance to save mankind", experts said that the world must stop increasing greenhouse gas emissions, energy conservation and emission reduction. As a convenient but non-renewable secondary energy source, with the acceleration of China's modernization construction, despite the rapid development of the power industry, its demand is also rising, and the power shortage is still quite severe. In particular, in recent years, the load on China's power grid has become more and more heavy, and even overwhelmed. In the peak period of power consumption, many regions have to adopt measures to cut the power limit to alleviate the voltage. Not only that, but the pollution of sulfur dioxide emissions from thermal power production is also worrying. In China, the maximum sulfur dioxide emissions allowed by the basic elimination of acid rain pollution is 12 to 14 million tons, but in 2003 China's sulfur dioxide emissions reached 21.587 million tons, an increase of about 12% compared with 2002. According to the current economic development speed and pollution control methods and efforts, by 2020, only sulphur dioxide emissions from thermal power plants in the country will reach 21 million tons, and all emissions will exceed the atmospheric environment capacity by more than one time. Health will be a serious disaster [2], so energy saving and emission reduction cannot be delayed.

Many developed countries and some developing countries have successively formulated the â€œGreen Lighting Projectâ€ and achieved remarkable results. China's "Eleventh Five-Year Plan" also clearly puts forward the development goal of "building a resource-saving and environment-friendly society." The purpose of this paper is to try to set up some equipment in some public places, such as school libraries, so that energy can be used reasonably and economically. These places have a large number of people entering and leaving, so the lighting in these places is almost from the beginning of work until the end of work. Regardless of whether there are people in these places or not, there are many unnecessary wastes of power resources. Science and technology must be people-oriented, starting from the needs of people: that is, there must be sufficient illumination (whether it is sunshine or artificial illumination) in places where people are active; areas without people should be extinguished to save energy. This design responds to the requirements of â€œenergy saving and emission reductionâ€ and has certain practical significance.

The overall idea of â€‹â€‹this design is: the usual borrowing room, the number of people reading is not much. If the daylight is very light, no matter how many people enter, it will not open. Make the most of natural light.

If the light of the day is normal, according to the actual situation of the reading room of the school library, if there are 10 seats in the window of the study room, the light in the window seat is bright, and the students usually enter. If the indoor light is not turned on, it will automatically sit. To the window seat, use natural light to save energy; when the number of people entering more than 10 people, students can only sit in other positions, if the indoor light is not enough, the trigger switch will open. If the room is too dark, the light will be triggered to turn on whenever someone enters.

As shown in Figure 1. 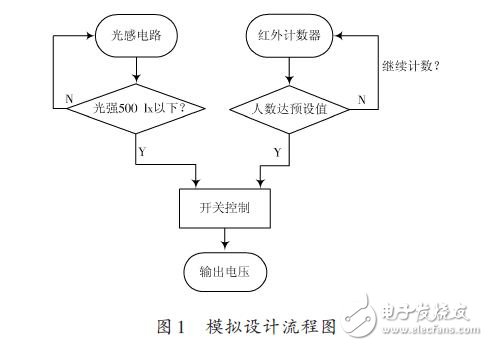 (3) When the light is bright, both light intensities are greater than 500lx, and the light does not turn on no matter how many people enter.

The main circuit of the equipment is the full bridge controlled circuit and the trigger circuit is the programmable integrated circuit. The phase-shifting, fixed width and modulation of the pulse are all digitized, and it does not need any adjustment for the section of the trigger. It has the features of high reliability, high pulse symmetry, strong anti-interference ability, quick reaction, as well as the advantages of no heat-generating, constant current, energy-saving which is compared with the discharge with the electrical resistance.