In recent years, LED technology has developed rapidly, and it has been widely used in signal indication, illumination, backlight, display and so on. With the advancement of chip technology, LEDs have entered the era of high power. Now 1W class high power LEDs are being used by the lighting industry and show a bright future. The increase in LED power and light efficiency makes it possible to replace traditional lighting methods with LED lamps. The core of the LED is a chip composed of a p-type semiconductor and an n-type semiconductor. There is a transition layer between the p-type semiconductor and the n-type semiconductor, which is called a pn junction. In some pn junctions of semiconductor materials, the injected minority carriers recombine with the majority carriers to release excess energy in the form of light, thereby directly converting electrical energy into light energy, and the LED is using injected electricity. Produced by the principle of luminescence.

Due to the current low quantum efficiency of LEDs, a large amount of heat is generated during the working process, and the thermal effects of high-power LEDs are particularly clear.

Obvious. If the heat cannot be dissipated in time, the temperature (junction temperature) of the pn junction in the LED will rise rapidly, resulting in a decrease in the effective recombination probability of the chip carriers, a decrease in the number of emitted photons, and a decrease in the light extraction efficiency. The emission spectrum of the LED chip is red-shifted. This is very unfavorable for the LED illumination system that uses blue light to excite YAG luminescent powder to obtain white light. Therefore, the heat dissipation of LED has become a major issue in the development of LED lighting technology. Solving the heat dissipation problem of LED lighting system is imminent. .

COB technology is one of the bare chip mounting technologies. The semiconductor chip is mounted on a printed circuit board, and the electrical connection between the chip and the substrate is realized by a wire stitching method. In the manufacturing process of high-power LED lamps, the usual method is to use the COB method to package the LED chips on an aluminum or copper substrate, and use an automatic wire bonding machine to connect the chip to the circuit on the substrate, and then to the substrate and the external circuit. connected. The substrate is attached to an aluminum heat sink to dissipate heat. Therefore, the quality of the heat sink directly affects the life, efficiency and light quality of the LED light fixture.

Thermal management is a key technology for manufacturing reliable, high-brightness LED systems. To solve the heat dissipation problem of the LED lighting system, it is necessary to know in advance the influence of temperature on the photoelectric parameters of the high-power LED lighting system. Many scholars at home and abroad have done a lot of research on the thermal resistance of LED chips, but there are few studies on the heat dissipation of white LEDs for commercial lighting. In this paper, in the high-power white LED lamps for lighting, the photoelectric parameters such as the luminous flux and electrical parameters of the light source are analyzed by the influence of temperature.

This article uses a 1W Ã— 3 series package white LED lighting module, its structure is shown in Figure 1. The chip uses a 45 mil sapphire substrate InGaN chip manufactured by Taiwan Jingyuan Optoelectronics. The luminescent powder is produced by Hongdae and mixed with Dow Corning silica gel in a certain ratio to form a luminescent powder coating. The thermal paste is TIG780-40 thermal paste with a thermal conductivity of 4.0W/mK. The substrate is made of aluminum. Select 4 different specifications of aluminum alloy (6063) cylindrical fins

The radiator is numbered 1-4, of which the radiator No. 1 is oxidized and the radiator No. 2-4 is not oxidized. The specifications are Î¦30mmÃ—H47mm, Î¦53mmÃ—H30mm, Î¦45mmÃ—H54mm, Î¦44mmÃ—H64mm. The photoelectric parameters were recorded by PMS-50plus UV-Vis-NIR spectroscopy system produced by Hangzhou Yuanfang Optoelectronics Co., Ltd. The temperature was recorded using the TC-2008 multi-channel temperature tester manufactured by Hangzhou Weibo Technology. 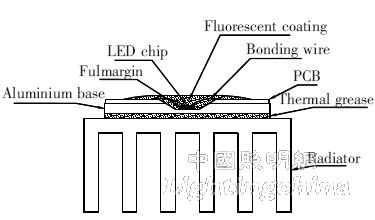 The LED light source is mounted on the heat sink, and the thermocouple of the TC-2008 multi-channel temperature tester is installed inside the heat sink to measure the temperature of the heat sink. The test point is where the aluminum heat sink meets the substrate. After the above device is installed, the integrating sphere is placed, driven by a 350 mA constant current power source, and the temperature and photoelectric parameters are recorded in a cycle of 10 s. The test system structure is shown in Figure 2. In the LED module driven by the constant current, the heat is transmitted to the fin heat sink by the aluminum substrate which can well meet the heat dissipation requirement, and then is radiated by the fin heat sink. When the LED module is working, the temperature of the heat sink will rise rapidly. The TC-2008 multi-channel temperature tester connected together will record the instantaneous value of the heat sink temperature. At the same time, the PMS-50 spectral analysis system will record the corresponding photoelectric parameters. 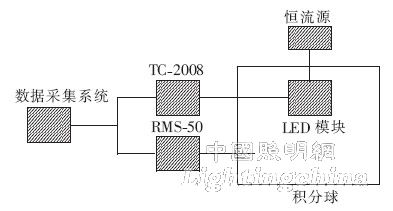 3.1 Effect of temperature on luminous flux 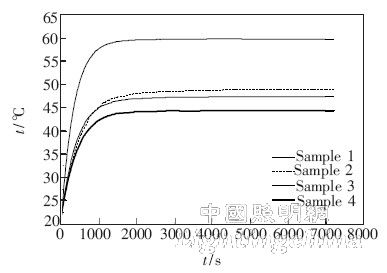 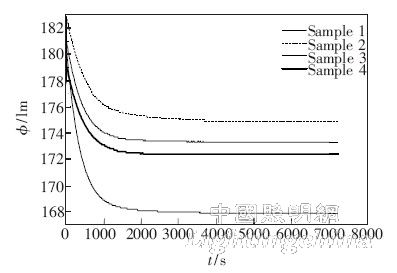