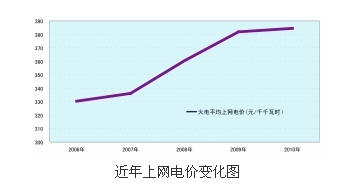 Although the performance of Huadian Energy's annual report in 2011 was lower than market expectations, the thermal power sector's profit was expected to increase by approximately 5 times year-on-year due to the increase in thermal power price at the end of last year and the low coal price in the market.

The effect of power price increase shows that there are two main factors influencing the performance of the thermal power sector in the first quarter:

The second is the impact of changes in thermal coal prices on the cost of thermal power. Taking the Qinhuangdao Port thermal coal price as an example, since November last year, coal prices have experienced a significant decline, dropping by up to RMB 90/t, with a range of 10.46%. However, compared with the average coal price of 778.33 yuan per ton in the first quarter of last year, the coal price in the first quarter of this year was an average of 781.61 yuan per ton, still higher than last year's average price of 3.28 yuan per ton. If the standard coal consumption is 330 g/kWh (approximately 420 g of thermal coal converted to 5500 kcal), assume that 70% of coal used in thermal power is market coal and 30% is contract coal. In addition, this year's contract coal prices have increased, assuming an average increase of 5%, an average increase of 30 per ton (assuming the average coal price last year is 600 yuan / ton), the cost of thermal power industry in the first quarter of this year will increase year-on-year: 0.00042*3.28* 6088.84*0.7+0.00042*30*6088.84*0.3=5.87+23.02, a total increase of about 2.9 billion yuan in costs.

From the current point of view, the uncertainty is whether the company's year-on-year increase in electricity sales can reach 7.5%, and how much the company's contracted coal prices increase. In addition, from the last year's annual report, the companyâ€™s financial expenses have grown by a large margin, and this factor may have a negative impact on the results of the first quarter of this year.

The shipboard power cables are intended for power, lighting and control system of shipboard and off-shore building, and it also can be used by metallurgical industry, chemical works, power plant and mine etc.