GaN materials have been widely used in display, indication, backlight and solid-state lighting since the 1990s, and have formed a huge market. To date, gallium nitride (GaN)-based light-emitting diodes (LEDs) fabricated on three substrates (sapphire, silicon carbide, and silicon) have been commercialized. In recent years, GaN-based LED technology on silicon substrates has received much attention. Because silicon (Si) substrate has the advantages of low cost, large crystal size, easy processing and easy transfer of epitaxial film, it has excellent performance and price ratio in power LED device applications.

Many research groups have grown GaN epitaxial films on Si substrates and some have obtained devices or studied the properties of Si-based GaN. In the preparation process of the LED, the GaN film was transferred to a new support substrate to prepare a vertical structure device, and the photoelectric performance was better than that of the ipsilateral structure device.

The epitaxial wafer used in the experiment is a 2 in (50.8 mm) blue InGaN/GaN multi-quantum well epitaxial wafer grown by MOCVD on a silicon (111) substrate, and its chip size is 1000 Lm@1000 Lm. It has been reported. The experiment prepared three epitaxial wafers grown in the same furnace. One of them was transferred to the Si substrate by pressure bonding technology and chemical etching method to obtain a light-emitting device, which is called sample A, and the other two were plated and chemically etched. The method discloses that the GaN epitaxial film is transferred to the plated copper substrate and the plated copper-chromium substrate, respectively, and the light-emitting devices are obtained, which are respectively referred to as sample B and sample C. The three kinds of samples were identical in the fabrication process of the other devices except that the epitaxial film transfer mode and the support substrate were different.

Because of the slight difference between individuals of similar samples, samples A, B, and C were initially tested, and representative chips were selected for experiments and tests. Each chip is packaged in a bare core. The chip current of 1000 Lm@1000 Lm usually operates at 350 mA. To accelerate aging, the sample A, B, C has a DC current of 900 mA at normal temperature. The current-voltage (I-V) characteristic curve, electroluminescence (EL) spectrum, and the relative light intensity of each sample at each current were measured using a power supply KEITHLEY 2635 and a spectrometer Compact Array Spectrometer (CAS) 140 CT. Wait.

Table 1 shows the Vf and I r values â€‹â€‹of the three samples before aging, aging 80, 150 and 200 h. The aging conditions are 900 mA at normal temperature, where Vf is the voltage at 350 mA and I r is the leakage at 10 V in the reverse direction. The current value, usually the reverse leakage current I r is measured at 5 V in the reverse direction. For the comparison result, the more severe conditions are selected and measured in the reverse 10 V. Figure 1 shows the I-V characteristics of the three samples before aging, 80, 150 and 200 h after aging, as shown in Figures 1(a) ~ (d). Figure 1(a) shows that the three samples A, B, and C have good I-V characteristics before aging, and the turn-on voltage is about 2. 5 V, and the current is 10 - 9 A in the reverse 10 V. Magnitude. After aging for 200 h, the leakage current I r of the three samples in the reverse 10 V was significantly higher than that before aging. Table 1 shows that the B sample has the lowest leakage current at the same back pressure ( - 10 V) after 200 h of high current aging, the second sample is the second, the C sample is the largest, and the three samples are in the same inverse with the aging time. The difference in leakage current is increasing. The InGaN MQW LED has a slight increase in the forward voltage after aging because the large current is aged for a long time, causing partial oxidation of the exposed n-electrode (aluminum), resulting in a large contact resistance. The reason why the leakage increases after aging is as follows: The width of the InGaN LEDpn junction depletion layer is mainly determined by the carrier concentration of the p-type layer. After the chip is aged for a long time by a large current, the acceptor Mg is decomposed by the Mg-H complex. Reactivation, causing the p-type carrier concentration to increase, leading to a narrowing of the depletion layer, thinning of the barrier region during reverse biasing, increase of tunnel breakdown components, and increase of reverse current; in addition, the chip undergoes long-term aging after a large current After that, the defect density in the quantum well region increases, the defect in the reverse bias and the trap-assisted tunneling cause leakage current, and the thermal conductivity of the three samples B, A, and C decreases in turn, so the defects and trap density generated during aging are sequentially Reduced, so the leakage current of the three samples increased in sequence under the same back pressure (as shown in Table 1 and Figure 1). 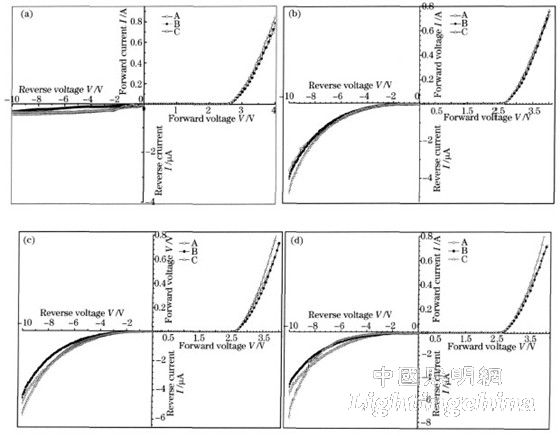 Fig.1 I-V characteristic curve before and after aging of three samples 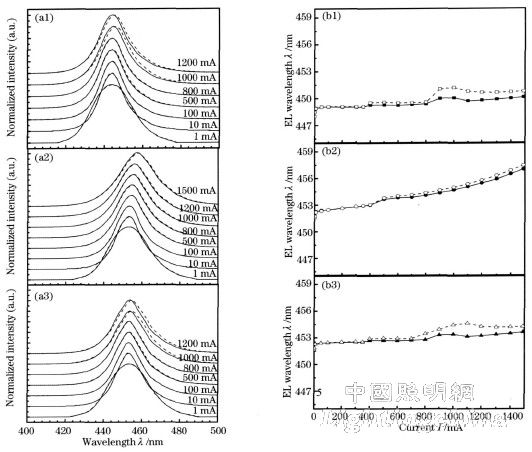 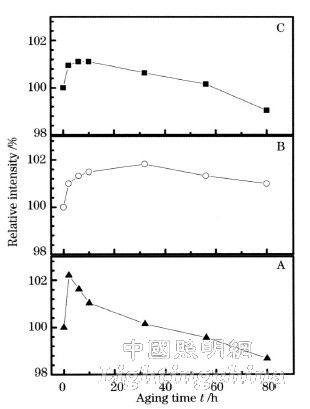