The battle between ARM and Intel processor architecture is heating up. The status of Intel x86 is really hard to shake today, but ARM has a significant power consumption advantage and will be more attractive in the future. So what kind of CPU can best meet future needs?

ARM released the Cortex-A15 processor in 2011, which uses a multi-core, out-of-order superscalar design with a clock speed of up to 2.5GHz. The Cortex-A15 is important because it runs counter to the previous generation of ARM designs, which achieved the lowest power consumption at the expense of performance. In contrast, the Cortex-A15 has a clear goal of achieving strong performance metrics while placing low energy consumption in a secondary position. ARMHoldings is essentially an intellectual property company that licenses its own designs to other manufacturers. The chips are manufactured by the manufacturer and then applied to other manufacturers' system products. At the end of 2012, products designed with Cortex-A15 began to appear on the market, and more such products are expected to appear in 2013.

However, processor companies that want to win future competition are not just ARM. A few weeks ago, Intel released a new low-power CPU based on its own Atom architecture for the data center. The Atom S1200 series is designed to provide instruction set compatibility for x86 on low power system-on-chip. The Atom S1200 series is targeted at microservers and other performance-oriented, low-power applications.

Below is a brief comparison of the Samsung Exynos 5250 (authorized implementation of the recently launched Cortex-A15) and the Intel Atom S1260 (high end of the S1200 series). The Exynos5 series is used in the latest Samsung Google Chromebooks and Nexus10 tablets. It is important to note that both the Samsung Exynos 5250 and the Intel Atom S1260 are only a large family of processors, so the best optimization for one market is not entirely suitable for another. The most typical example is Exynos' 4GB memory limit, which is normal for mobile applications, but obviously not suitable for cloud computing. However, the Cortex-A15 architecture uses a 40-bit paged memory algorithm ("large physical address extension") that can support up to 1TB of memory. 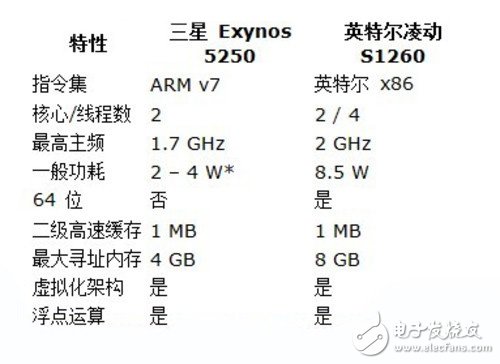 Note: The power consumption of the Exynos 5250 is currently unknown and difficult to obtain. I searched all the Samsung documents and could not find them. My only benefit was to find a voltage estimate at StreamCompuTIng. This value may not be correct. The main purpose here is to show that its power consumption is quite low and may be lower than the Atom 1260.

The question now is which CPU is better for ARM and Intel x86? However, this will raise another question: Where is it better? The two markets that Leverhawk is primarily interested in are mobile computing and cloud computing, so the analysis will be more focused on these two aspects.

The main factors to be compared are: