In addition to public transportation, cars, electric cars, and bicycles have become our main means of travel. When we encounter the peak hours of congestion, people who drive are envious of cycling or electric cars, and when they encounter wind and snow, the latter has the envy. The person sitting in the car. In order to solve such problems, Swedish design engineer Mikael Kjellman opened his brain and invented a device across the three worlds: the car + electric car + bicycle combination scooter PodRide. 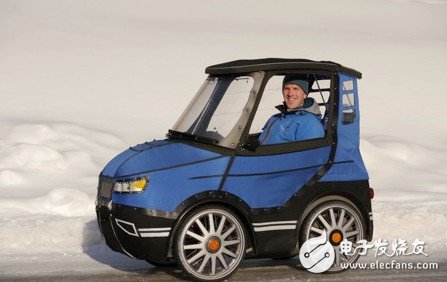 Germain is a cyclist himself. The original intention of inventing PodRide was to enable him to enjoy a "warm" and "safe" cycling experience in the cold winter.

PodRide is seen as an electric bike hidden under the "car" casing. The compact body is modeled after an ordinary car. "The sparrow is small and complete," PodRide is equipped with four wheels, waterproof shell, comfortable seat, multi-speed transmission, LED lights, hand brake system, manual wiper, and even a trunk. In appearance, PodRide is more like an old scooter.

But when you open the body, you will realize that PodRide is an electric bicycle with an electric motor that can achieve 25 kilometers per hour and a cruising range of 60 kilometers. Even if the battery is dead, you can use it as a bicycle. , step on the pedals.

From a video released by Germain, the budding PodRide is running in the snow and ice, but it is quite stable, and even able to play drift and consign goods.

It should be noted that PodRide is not a motorized car in essence, so you don't need a driver's license, you can drive it on the sidewalk.

In order to be able to promote this idea, Germain has launched a crowdfunding project on the indiegogo website. Early supporters can book the car for $500 (about RMB 3,446) and get a 15% final retail purchase. Offer. The final retail price of the car has not yet been announced.

Cool video across the three-way scooter: